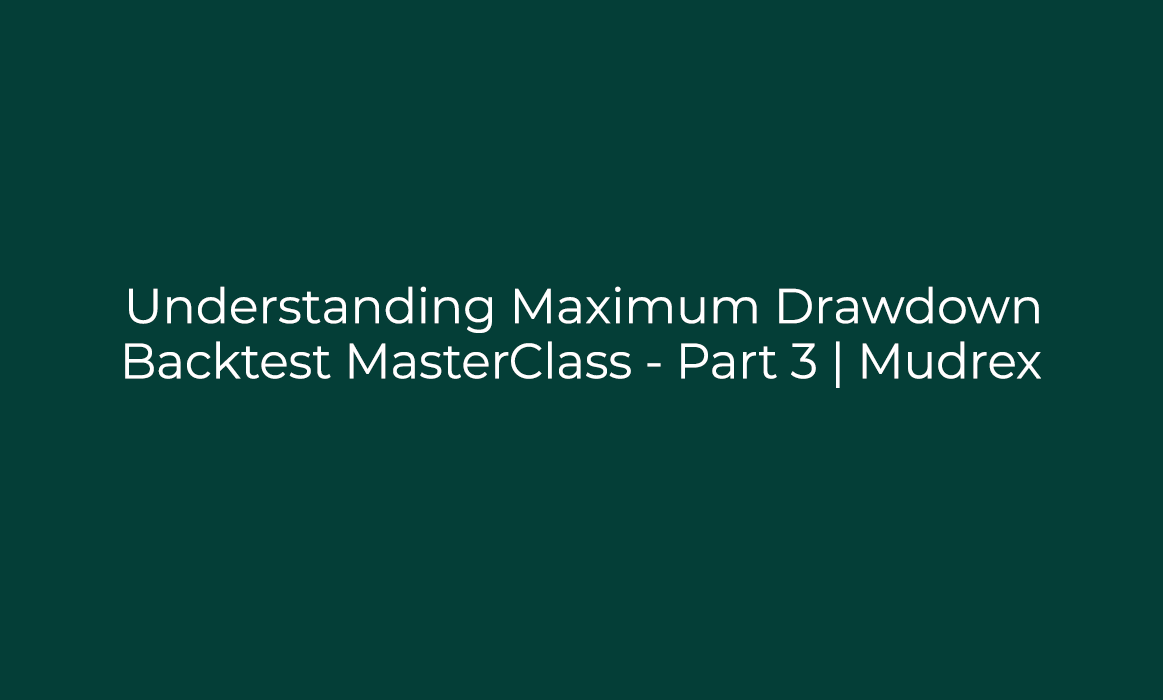 The fundamental aim of any strategy construction is to deliver optimal risk-adjusted performance. While “risk” can be defined in a number of ways, Maximum Drawdown (MDD) is probably one of the clearest ways to measure an investor’s risk appetite and thus is an important factor to consider when building strategies. This article discusses the different ways in which maximum drawdown can be used as a risk factor to construct optimal trading strategies.

Maximum Drawdown is the peak-to-valley decline (usually quoted as a percentage) of an investment during a specific holding period. A drawdown is measured from the time a retrenchment begins to when a new high is reached. This method is used because a valley can’t be measured until a new high occurs. Once the new high is reached, the percentage change from the old high to the smallest trough is recorded. Drawdowns can help to determine an investment’s financial loss risk by looking into the past.

Apart from the time horizon under consideration, the magnitude of drawdowns also depends on the frequency of measurement. For instance, over a one-year period, the drawdown of an investment measured in monthly returns may be significantly lower than the drawdowns measured on a daily basis. This is because there are a greater number of data points when using daily data compared with using monthly data.

The maximum drawdown formula is:

However, as always, you never have to worry about writing codes or excel functions to calculate such performance metrics because Mudrex does it for you for free!

Maximum drawdown is an important trading statistic that you should know in your backtesting and live trading. In backtesting, it shows you the downside risk of a strategy. Tracking max drawdown in live trading helps you understand when your strategy might not be working as expected.

Clients, both retail and institutional, place a lot of importance on MDD. Even though the performance of a strategy is to be measured against its long-term objectives, short-term performance matters, especially when there is a market sell-off.  Strong drawdowns may force traders to temporarily stop trading and may even lead to a re-evaluation of their trading strategy. In the case of leverage, drawdowns have a much larger effect on strategy performance.

The most fundamental interpretation of MDD is the fact that if your strategy is well equipped to anticipate a possible drawdown/downtrend in the future, then why did it fail to anticipate and sell before the MDD downtrend started. Even though the losses incurred during MDD are imaginary i.e. the trade with that loss actually might not have happened, but if you’re using a short strategy, you could’ve made profitable use of MDD had your strategy been intelligent enough to anticipate it before it actually happened. Analysing this failure to detect a downtrend can thus help improve upon your strategy.

Intelligent investors will determine what their probable maximum loss limit is for a one year period. Notice this is a “probable” loss not “possible” loss. A lot of traders believe that anything over a 20% MDD becomes devastating to a portfolio. You may choose a different number that approximates an ideal or optimum number for long term growth.

The two most important moments of a distribution are the mean and standard deviation of the distribution. Most investors and portfolio managers focus on these two parameters to build risk-optimal portfolios. Volatility masks true trading risk when skewness and kurtosis are not taken into account. In such cases, MDD is a handy measure to evaluate “expected worst case” risk.

A higher Calmar ratio indicates that a strategy’s return has not been at risk of large drawdowns. A lower Calmar ratio, on the other hand, suggests that the drawdown risk is higher.

What is a Good Maximum Drawdown?

There’s no such a thing as a “good” maximum drawdown. Acceptable maximum drawdown will vary by trader. Many new independent traders strive to have a low maximum drawdown. But with low risk also comes low rewards. If you are OK with that, then low drawdowns should be one of your goals. However, if you want to see higher returns, then you will usually have to endure higher drawdowns.

Another thing to consider when looking at max drawdown is the psychological effect that the drawdown might have on you. Some traders are able to withstand a 60% drawdown, in exchange for also having higher returns. But for a lot of traders, a 60% drawdown would freak them out! So you should find your “freak out” point and tailor your trading strategy accordingly. A good max drawdown for you might be more like 20%. If that’s the case, you will probably have to risk less per trade.

While the extent of drawdowns is a factor in determining risk, so is the time it takes to recover a drawdown. Not all investments act alike. Some recover quicker than others. A 10% drawdown in one trader’s account may take years to recover that loss. On the other hand, another trader may recover losses very quickly, pushing the account to peak value in a short period of time. Therefore, drawdowns should also be considered in the context of how long it has typically taken you to recover previous losses.

Your backtesting results may have produced solid returns, but if you couldn’t realistically endure the biggest drawdown, then the system won’t work for you. It’s good to know that before you start trading with real money. However, if you’re still worried about losing a major chunk of your savings in the fear of losses incurred during a drawdown, don’t worry, Stop Loss has your back in this scenario. Next up in our series of MasterClass on Backtest, we are going to talk about other risk management techniques you might already be familiar with, Stop Losses and Take Profits!

Stay tuned for the same!