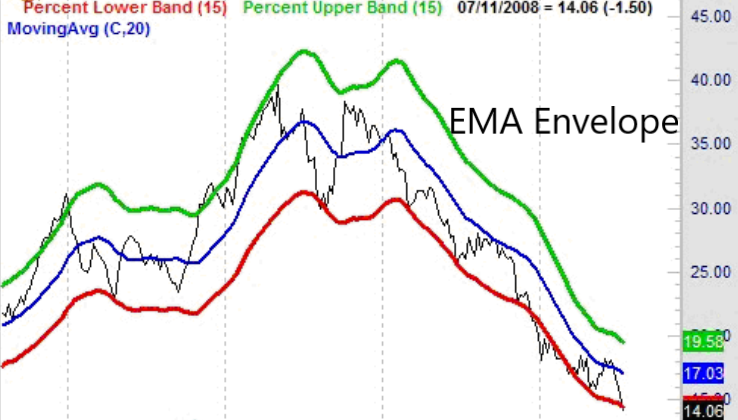 What is an Exponential Moving Average Envelope?

EMA trading is one of the oldest forms of trading strategy and is also trusted by thousands of cryptocurrency traders.

An exponentially weighted moving average reacts more significantly to recent price changes than a simple moving average, which applies an equal weight to all observations in the period.

EMA Trading Strategy can be used in any time frame as well as for any kind of market, makes EMA a better tool to be used.

Lines that were a certain amount above and below the moving average form the envelopes, which are used in the Exponential Moving Average Envelope Trading Strategy.

You can also check out the Double Exponential Moving Average Envelope Trading Strategy.

Exponential Moving Average Envelope is a trend indicator, where the EMA envelope is formulated with lines above and below the EMA.

EMA is used to smooth out the price action by formulating lines around the price chart using the simple EMA formula.

The confusion around the daily price chart is reduced by the EMA Strategy as Exponential Moving Average puts more weight on the recent price charts making it more reliable than Simple Moving Average.

How to Calculate EMA Envelope?

To calculate the Exponential Moving Average Envelope, three different calculations are to be made altogether which are described as follows:

At the first instance, the EMA value is calculated which forms the line close to the price chart which is also explained in the blog explaining exponential moving average. Followed by calculating the upper value of the band and the lower value of the band.

Why use Exponential Moving Average Envelope?

EMA Trading Strategy is one of the oldest strategies and reliable over professional traders. The main reasons for the reliability are as follows:

How to use EMA Envelope Strategy:

The EMA is a moving average that places a greater weight and significance on the most recent data points. Like all moving averages, this technical indicator is used to produce buy and sell signals based on crossovers and divergences from the historical average. Traders often use several different EMA lengths, such as 10-day, 50-day, and 200-day moving averages.

The step by step procedure to be followed is as follows:

BUY: When price crosses up the upper band.

SELL: When price crosses down the lower band.

Final Strategy: The final strategy on Mudrex looks like this

We can now run a quick back-test to see how our strategy performs.

Top 10 Benefits of Investing in Cryptocurrency in 2022