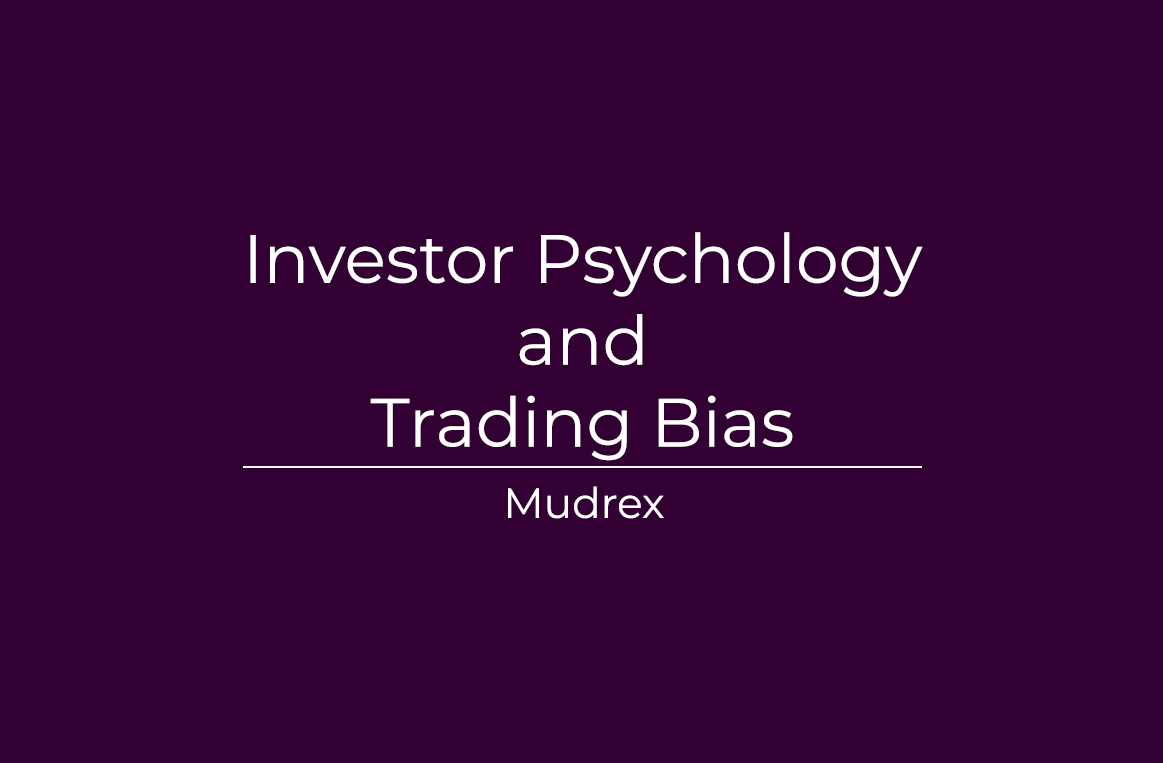 Any Billions fans in the house? In this Wall Street vs United States Attorney show, a quant interviewee when asked by a hedge fund manager, “Why  finance?” replies:

“The stock market is a representation of the psychology of the entire world at any given moment. Data is an exact thumbprint of that moment. I get to know what the world is thinking and feeling and what it will do next.”

When computer science was introduced to automate decision making, many hoped computers would reduce prejudice and discrimination. Unfortunately, that’s not the case, as machines are made and trained by humans, and the data that those machines use is input by humans. Hence it is empirical for programs or in our case talking about algorithmic trading to amplify biases and errors.

We all have strongly ingrained biases that exist deep within our psyche. While they can serve us well in our day-to-day lives, they can have the opposite effect on investing. Investing behavioural biases encompass both cognitive and emotional biases. While cognitive biases stem from statistical, information processing, or memory errors, an emotional bias stems from impulse or intuition and results in action based on feelings instead of facts.

In the investment process, investors often experience the “roller coaster of emotions” illustrated below. Does this look or feel familiar to you?

If you think that investing in the crypto market is all about crunching numbers, you will be surprised to learn that your own psychology is as much, if not more important when it comes to making critical decisions. The study of the mind and behaviour as it relates to how we invest is a subject that is not only extremely interesting but also greatly useful to investors. Since market moves tend to be erratic and often irrational, self-awareness can help us recognise when our instincts are not grounded in clear thinking. Nothing is more unfortunate than losing money despite having the right research at one’s fingertips, simply because of the very human tendency to act and think in certain ways.

Successful investing is hard, but it doesn’t require genius. In fact, Warren Buffett once quipped, “Success in investing doesn’t correlate with I.Q. once you’re above the level of 25. Once you have ordinary intelligence, what you need is the temperament to control the urges that get other people into trouble in investing.” As much as anything else, successful investing requires something perhaps even more rare: the ability to identify and overcome one’s own psychological weaknesses.

Trading bias is a predisposition or perspective of the financial markets whereby traders believe there is a higher probability of a certain outcome as opposed to any other alternate possibilities. These trading biases are determined by technical and/or fundamental factors that support a specific outlook that explains market behaviour.

Some of the most damaging effects of being a biased trader include deviation from your trading plan, keeping stops too tight, exiting or buying at the wrong time, exiting trades too early, developing a reliance on crowd-driven information, missing out on trades because of preconceived notion of price, hanging on to losing trades and delaying cutting your losses. As most of these biases are related to traditional trading, we won’t talk about them in-depth. We’ll further talk about the biases which exist in algorithmic trading and how you can overcome those to reduce the psychological factor from your strategy.

The following is a great infographic that accurately summarises the most popular traditional trading biases:

The process by which algorithmic trading is carried is known as backtesting. It is done by exposing a particular strategy algorithm to a stream of historical financial data, which leads to a set of trading signals. There are many biases that can affect the performance of a backtested strategy. Unfortunately, these biases have a tendency to inflate the performance rather than detract from it. Thus you should always consider a backtest to be an idealised upper bound on the actual performance of the strategy. It is almost impossible to eliminate biases from algorithmic trading so it is best to minimise them to make informed decisions about our algorithmic strategies.

This is probably the most insidious of all backtest biases. It involves adjusting or introducing additional trading parameters until the strategy performance on the backtest data set is very attractive. However, once live the performance of the strategy can be markedly different. Another name for this bias is “overfitting”, “curve fitting” or “data-snooping bias”.

Optimisation bias is hard to eliminate as algorithmic strategies often involve many parameters. “Parameters” in this instance might be the entry/exit criteria, look-back periods, averaging periods (i.e the moving average smoothing parameter) or volatility measurement frequency. Optimisation bias can be minimised by keeping the number of parameters to a minimum and increasing the number of data points in the training set. In fact, one must also be careful of the latter as older training points can be subject to a prior regime (such as a regulatory environment) and thus may not be relevant to your current strategy.

Look-ahead bias is introduced into a backtesting system when future data is accidentally included at a point in the simulation where that data would not have actually been available. If we are running the backtest chronologically and we reach time point N, then look-ahead bias occurs if data is included for any point N+k, where k>0. Look-ahead bias errors can be incredibly subtle.

The good thing about backtesting on Mudrex is that the selection of data is automated and thus there’s no scope of a Look-Ahead Bias when you’re backtesting on Mudrex. However, one thing to be kept in mind here is that the information in the data points within a single candlestick gets lost due to the chosen tick interval. For example, if you’ve chosen a tick interval of 1D, the data relevant to the 1H candlesticks would be lost and your trades will only be placed at an interval of 1 day. This can thus lead to major losses in highly volatile midcap and low-cap cryptocurrencies like Theta Fuel or Ankr where rallies or crashes of as much as 50% can happen within hours.

Survivorship bias is a particularly dangerous phenomenon and can lead to significantly inflated performance for certain strategy types. It occurs when strategies are tested on datasets that do not include the full universe of prior assets that may have been chosen at a particular point in time but only consider those that have “survived” to the current time.

As an example, consider testing a strategy on a random selection of equities before and after the 2001 market crash. Some technology stocks went bankrupt, while others managed to stay afloat and even prospered. If we had restricted this strategy only to stocks that made it through the market drawdown period, we would be introducing a survivorship bias because they have already demonstrated their success to us. In fact, this is just another specific case of look-ahead bias, as future information is being incorporated into the past analysis.

This particular phenomenon is not often discussed in the context of quantitative trading. However, it is discussed extensively in regard to more discretionary trading methods. It has various names, but I’ve decided to call it “psychological tolerance bias” because it captures the essence of the problem. When creating backtests over a period of 5 years or more, it is easy to look at an upwardly trending equity curve, calculate the compounded annual return, Sharpe ratio and even drawdown characteristics and be satisfied with the results. As an example, the strategy might possess a maximum relative drawdown of 25% and a maximum drawdown duration of 4 months. It is straightforward to convince oneself that it is easy to tolerate such periods of losses because the overall picture is rosy. However, in practice, it is far harder!

If historical drawdowns of 25% or more occur in the backtests, then in all likelihood you will see periods of similar drawdown in live trading. These periods of drawdown are psychologically difficult to endure. I have observed first-hand what an extended drawdown can be like, in an institutional setting, and it is not pleasant – even if the backtests suggest such periods will occur. The reason I have termed it a “bias” is that often a strategy that would otherwise be successful is stopped from trading during times of extended drawdown and thus will lead to significant underperformance compared to a backtest. Thus, even though the strategy is algorithmic in nature, psychological factors can still have a heavy influence on profitability.

The takeaway is to ensure that if you see drawdowns of a certain percentage and duration in the backtests, then you should expect them to occur in live trading environments and will need to persevere in order to reach profitability once more.

Whether it’s mental accounting, irrelevant anchoring or just following the herd, chances are we have all been guilty of at least some of the biases and irrational behaviour highlighted in this tutorial. Note that this list of cognitive bias and the examples are not exhaustive. There are dozens of flavours of cognitive biases out there. Don’t feel overwhelmed. It is not a trader’s job to learn how to label cognitive biases. Our job is to ground our decisions in robust and consistent analyses, reducing the effect of one bias at a time. Do not try to get rid of cognitive biases entirely. First, because it is not possible. Second, because it is not necessary. Ultimately, you should aim to cut the effect of cognitive biases on our trading activities to achieve market success. Hopefully, your future financial decisions will be a bit more rational and a lot more lucrative as well after this.

Stay tuned for more and read more on the Mudrex blog.