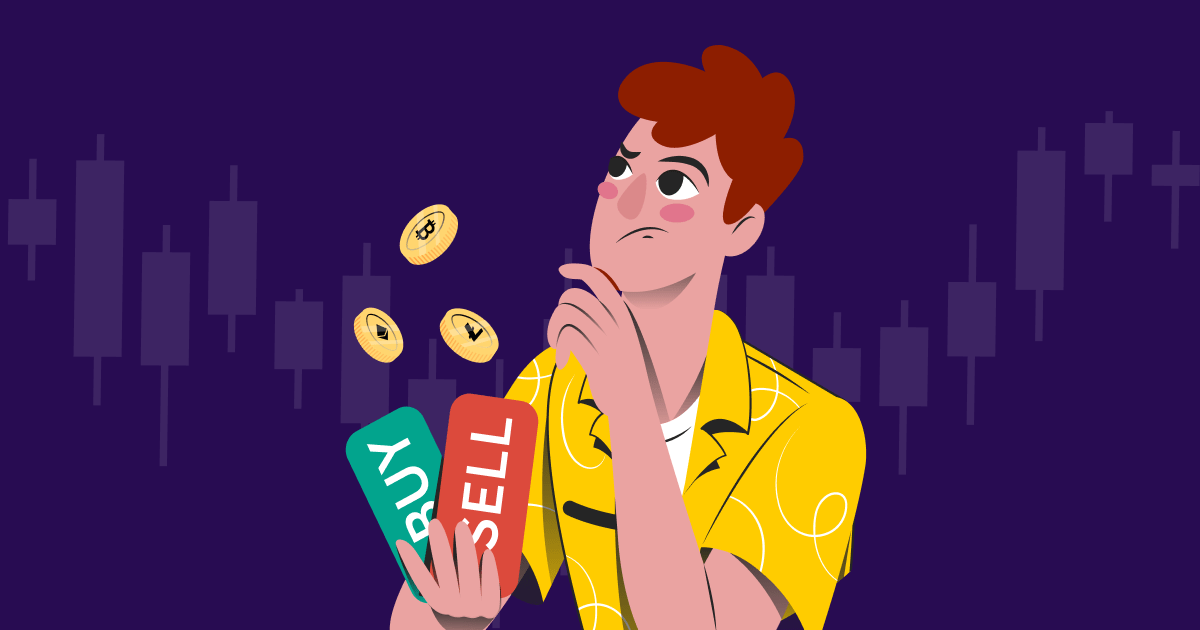 “In the long term, we’d all be dead.” It’s a common phrase used by technical analysts to take a jibe at long-term investors. Similarly, long-term investors are often found criticizing the traders. We? We are neither. An efficient investor always uses all the tools at their disposal to maximize returns. So what if you are in it for the long term? You can always hop in and out of an asset whenever the valuation does not seem correct to you.

So if you belong to a similar league, we dedicate this blog post to you. We will discuss one of the most effective techniques to pick winning assets, the most advantageous times to buy them, and the most effective risk management. Enter Wyckoff Theory. What is it? How can you put it into practice? We’ve got you covered. Read on!

What Is the Wyckoff Theory?

In the 1930s, Richard Wyckoff developed a series of principles and strategies to invest in the stock market. The theory held its ground till modern times; hence, traders and investors started applying it to other financial markets like crypto.

The Wyckoff theory outlines some key trends in price action, which are determined by the cycle of accumulation and distribution. Four phases outlined in this theory are as follows:

Wykoff also came up with specific rules to be used along with these phases to predict the significance of a price within the broader spectrum of uptrends, downtrends, and sideways markets.

Who Was Richard Wyckoff?

Richard Wyckoff (1873-1934) was a famous stock market trader and investor. He is considered the pioneer of the technical method of analyzing the market. Using his approach, Wyckoff predicted a point where the risk and reward were optimal for entering/exiting a trade.

Apart from that, Richard was also a proponent of risk management. Hence, the stop loss was a part of each of his techniques. For the uninitiated, stop loss is a way of automatically selling a  stock when it falls to a specific level. This is done to minimize the losses in a trade.

As Wyckoff accumulated wealth, he also wanted to help others navigate the stock market. So he resorted to teaching and publishing media reports.

What Purposes Does the Wyckoff Method Serve?

The Wyckoff method serves as a theory to define how and why the stock and commodity markets move in a particular direction. Traders and investors use the Wyckoff method to determine market trends. It can help its users find more profitable trades.

Rules in Wyckoff Theory: The Foundation

Wyckoff’s rules are derived from his study and experience of charting the market. These rules are general guidelines and principles for traders to look out for.

The market and individual securities do not behave in the same way twice.

Known as a shapeshifting phenomenon in modern-day technical analysis, this behavior always stays one step ahead of profit-taking. This rule states that the trend emerges in buckets of similar price patterns that show variations in size, detail, and extension. Every such bucket is different enough from the previous one to confuse the market.

So for those who predicted markets to bounce back in the same way during the second wave of Covid, here’s an eye-opener for you.

The significance of price movement reveals itself only when compared to past price behavior.

Well, it is just another way of saying that prices should never be evaluated in isolation. If you look at the price movement today and try to predict tomorrow, you will most likely fail due to a lack of context.

Prices should always be seen in correspondence to the prices at the same time yesterday, last week, last month, last year, and so on.

The Four Phases of Wyckoff Market Cycles or Price Cycles

Wyckoff market cycles are developed based on the rules we discussed above. Traders and investors use these to predict the market’s general direction and the signs of reversal. It also points them toward hints of whales accumulating or selling positions.

The four phases of Wyckoff market cycles are accumulation, markup, distribution, and markdown. These phases are used to guess the market sentiment and hence predict the direction of the price of a stock or commodity.

Let us discuss each of these phases in detail:

Accumulation marks the beginning of a new cycle. Each such cycle has a trading range attached to it.

This range has a ‘high,’ which acts as resistance (difficult to surpass that price), and a ‘low,’ which acts as support (it’s hard for the price to go below that). The lows, also known as the failure point, mark a selling climax.

Wyckoff created a fictional entity called the ‘composite man’ in the stock market. He suggests that we view the stock market as run by a single person or operator. In essence, this composite man refers to the whales or wealthy investors/institutions. It is in their best interest to steer the market so that they can always buy low and sell high. If observed closely, one can predict the movement of the composite man.

A composite man always accumulates or takes positions before others in the market. This is done strategically to ensure that the ‘buy’ is not reflected in the prices. Markets show a sideways movement during the accumulation phase.

Markup is defined by the slope of the upward trend. Each markup will have the following characteristics:

A composite man would sell his positions to the people entering late into the market. This is again denoted by a sideways movement until the demand exhausts. A characteristic marking the start of the distribution phase is the failure to form higher highs or each subsequent local peak being less than the previous one.

To understand the distribution phase better, think of it as the exact opposite of the accumulation phase. Just like the former, distribution is also range bound. There are often pullbacks to the previous resistance, and can be used to short the commodity for profit.

The exact opposite of markup, markdown is measured by the slope of the downward trend. Similar to uptrend, downtrend also has re-distribution phases where the market tends sideways.

Another key feature of a markdown is bull-trap or dead cat bounce. It is the moment of a short jump in the prices where traders mistake it for reversal and hence get trapped.

The Three Laws of the Wyckoff Theory

1. The law of supply and demand

This law is not exclusive to the Wyckoff theory and resonates with the basic principles of economics. The first law states that the prices go up when supply is lesser than demand and vice-versa. It also says that if demand is equal to supply, the market moves sideways, and the volatility is low.

2. The law of cause and effect

The second law states that the difference between supply and demand is not random. Specific events drive them. Simply put, any movement in the market would have a rationale behind it.

3. The law of effort vs result

The final law of the Wyckoff theory states that the change in the price of an asset is a result of an effort represented in the trading volume. In other words, if the price of an asset goes up along with an upward trend in the volumes, the trend is likely to sustain. Alternatively, if the divergence between price and volume increases, we are due for a reversal.

To further explain this, if the movement of an asset is accompanied by greater volumes, the trend is likely to sustain.

For example, in the current bear market, say, Bitcoin price goes sideways along with very high volume, it shows that many Bitcoin changed hands, but the price action was not significant. This hints at a nearby reversal.

The Wyckoff method is devised using the laws, rules, and price cycles we learned above. Any investor willing to jump into the market can apply this method to predict the outcomes to a certain extent. Let us discuss the five steps involved in the application of this theory.

1. Try to predict the current market direction and, most likely, future turn of events. Using supply and demand, predict if the market is positioned to go up from here or tank down.

2. Select stocks or crypto that follow similar market trends. Ideally, you would need crypto that bounces back harder during the upswings and shows a relatively lower downside during the downtrend.

3. Shortlist the stocks or crypto which is in the accumulation phase. If you are preparing to sell, check the asset for the distribution phase. These cryptocurrencies showcase the potential to meet your target price.

4. Check out the volumes and price movement of the stock and overall market before taking a position. This will increase the probability of your hypothesis being correct.

5. Time your trade in such a manner that you are in a position to leverage the larger market swings. In other words, buy a stock if you feel the market will reverse or sell if your analysis suggests that the market will fall.

Limitations of the Wyckoff Method

Institutions and individuals use the Wyckoff method to refine their trading strategies. It has stood against the test of time and is still a relevant method of technical analysis of securities and stocks.

While the overall methodology has helped formulate their individual strategy, the finer details are still subjective. Furthermore, it would be difficult for a newbie to identify patterns using the Wyckoff method. It may require years of practice to gain expertise.

To top it off, the Wyckoff method cannot be used for high-frequency trading. It works best for short-term trades and hence might not be suited if that is not your angle.

While the learning curve is steep, the Wyckoff strategy can help you generate profits if applied appropriately. Once you successfully figure out the way to predict highs and lows, it should be a smooth ride.

But what if you do not have the time or patience to learn and practice? After all, understanding Wyckoff’s theory is one thing, and applying it is another. You have to put in a lot of hard work to research, allocate your funds and rebalance them periodically. Wait. Don’t lose hope yet. You can still up your investing game through Coin Sets by Mudrex. They allow you to invest in themes instead of individual cryptos. This saves a lot of time and hedges your risk by diversifying within the theme.

Well, the essence of trading is context. So don’t look at the Wyckoff method standalone. The more you practice and learn, the better you can contextualize the market conditions. While the Wyckoff strategy is the beginning, a lot more strategies can be explored after that to further strengthen your cause.

1. How accurate is Wyckoff strategy?

Wyckoff method has been used for decades now to predict the market direction. It has stood the test of time and has been applied to other financial instruments like crypto and commodities as well. Therefore, if practiced enough, the Wyckoff method is quite reliable.

2. What are the 4 Phases of the Wyckoff cycle?