5 Energy Efficient Cryptocurrencies to Invest in 2021 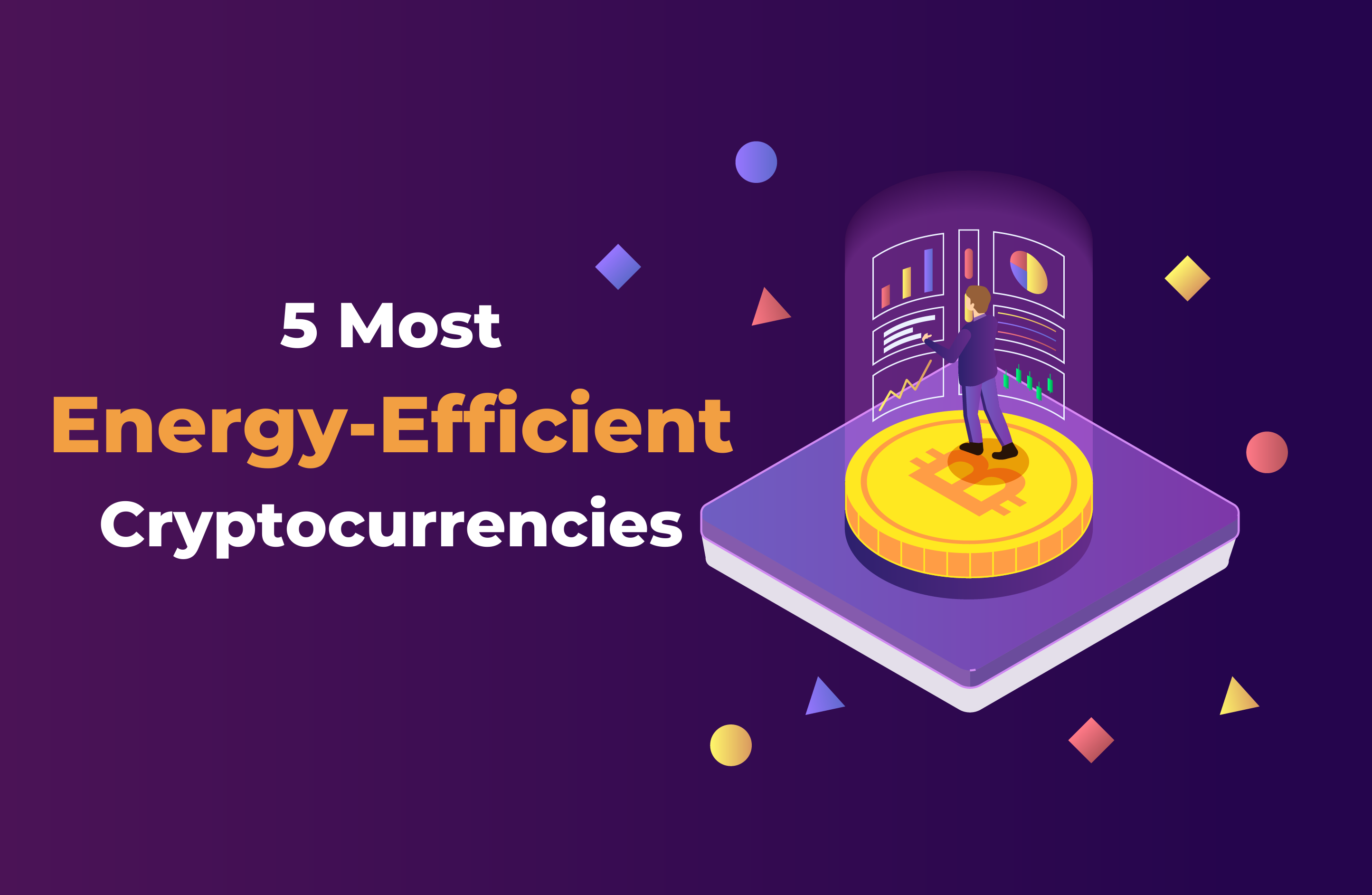 While cryptocurrencies grow across the globe and make their way into our lives, there exists a concern about their energy efficiency. To put things into perspective, to create Bitcoin traders use, around 91 terawatt-hours of electricity annually is consumed, which is more than the consumption of Finland, a nation of about 5.5 million. Therefore, it might be time to look at green cryptocurrencies that are not so reliant on energy. This blog post will talk about some energy efficient cryptocurrencies that don’t run on power-hungry mining rigs and instead use an alternative form of computation to create coins.

Why is cryptocurrency bad for the environment?

Cryptocurrencies require energy to execute computations, which requires electricity and supplements the burning of fossil fuels. Cryptocurrency mining, which is used to generate new coins for verifying and adding transactions to the public ledger, requires a lot of computational power from modern computers. In turn, it can be seen as a process of converting electricity into money by paying the full retail price for the consumption on the electrical outlet. Because Mining uses a lot of processing power, it contributes to global warming due to the increased consumption of electricity.

In general, bitcoin needs more and more computing power to keep up with a growing network in terms of transaction numbers and therefore consumes an increasing amount of energy. With the price of Bitcoin expected to continue increasing, this will generate more revenue for cryptocurrency miners and result in greater electricity consumption. This is the case despite the growing trend towards renewable energy sources in recent years.

5 Most energy efficient cryptocurrencies to invest in

Hedera Hashgraph (HBAR) is a decentralized public blockchain similar to Ethereum and NEO but with critical differences. Firstly, it does not use proof-of-work (POW). Instead, it has its own consensus mechanism, which is called virtual voting. The main difference between this and traditional POW is that there is no waste of energy due to the amount of electricity required to mine the coins.

Second, it has instant transaction speeds, which is fast enough for nearly any practical application that requires real-time responses in the blockchain system. Compared to Bitcoin, Hedera Hashgraph is efficient by at least an order of magnitude in terms of energy expended.

SolarCoin is a cryptocurrency that works similarly to Bitcoin but only has one primary purpose: to accelerate the adoption of solar energy. On average, each SolarCoin rewarded represents 1 megawatt per hour (MWh) generated by a solar panel system. Each MWh can power hundreds of homes with clean energy during daylight hours when the sun is shining.

Mining cryptocurrencies like SLR creates new currency at an ever-decreasing rate until all coins are mined thoroughly. With bitcoin, this will happen around 2140. SolarCoin was designed first to create 97,500,000 million units and then create a fixed amount of currency each year after that. This means it will take well over 100 years to mine all of the SLR currency. SLR sets itself apart from other cryptocurrencies by doing good for the earth and rewarding solar power producers.

BitGreen is the first cryptocurrency that attempts to solve Bitcoin’s energy problem through renewable energy and green Mining. Bitcoin’s current state of net consumption stands at 1.8 TWh (terawatt hours), with each transaction using an average of 360 KWh—enough electricity to power over 9 US households for a day!

Green Mining is based on renewable energy sources, which are more reliable over the longer term. Solar panels provide a constant electricity supply, while wind turbines can produce around 35% of their total output on average every day (IEA). BitGreen miners will be able to take advantage of this by mining BITG coins on weekdays when there is less power generated from solar panels on the weekends. Finally, Green Mining encourages daily usage of BitGreen outside of speculative value, allowing it to gain wider adoption than other cryptocurrencies that struggle with their proof-of-work models.

Chia is a new cryptocurrency that provides a radically different approach to distributed consensus in a novel blockchain designed for efficiency and scalability. It uses proof of space and time, and these parameters can be set according to bandwidth and storage, respectively, instead of computation as the primary consensus method. In addition, Chia’s file coin will use Proofs of Replication (PoRep), which incentivizes users to provide hard drive space for network security in exchange for rewards in Chia’s native currency, XCH.

By removing unnecessary data from blocks and then validating blocks only on an as-needed basis, Chia uses hard drive space and uploads bandwidth rather than expensive computation. Chia’s consensus algorithm is made available as a public good. Any party can purchase excess hard drive capacity and lend it out for Mining on the chia blockchain. This enables everyone with extra storage capacity to earn passive income from their investment in computing hardware and data centre infrastructure (which ought to be substantial).

IOTA is a brand new and novel micro-transaction crypto-token optimized for the Internet-of-Things (IoT). The IOTA crypto token that is really suited for machines and for IoT in particular. This is achieved by getting rid of transaction fees altogether, thereby that even the smallest nano payments can be made through IOTA.

IOTA uses a new distributed ledger architecture, the Tangle, which is based on a DAG (Directed Acyclic Graph). As such, there are no blocks, no chain, and therefore no miners. Because of this radical new architecture, things in IOTA work quite differently compared to other crypto tokens and currencies. To participate in this system, one has to actively participate in the consensus and validation process by approving two past transactions.

The world is changing. For the better, we hope! One of those changes that could be for the better is cryptocurrency mining being more energy-efficient than ever before. This should give us all a little bit more peace of mind as this new technology grows and matures in front of our eyes. The future of cryptocurrency is looking brighter and greener with the release of new energy efficient cryptocurrencies!