Home » What Are Altcoins? Know Altcoin Types, Benefits, and Examples

What Are Altcoins? Know Altcoin Types, Benefits, and Examples 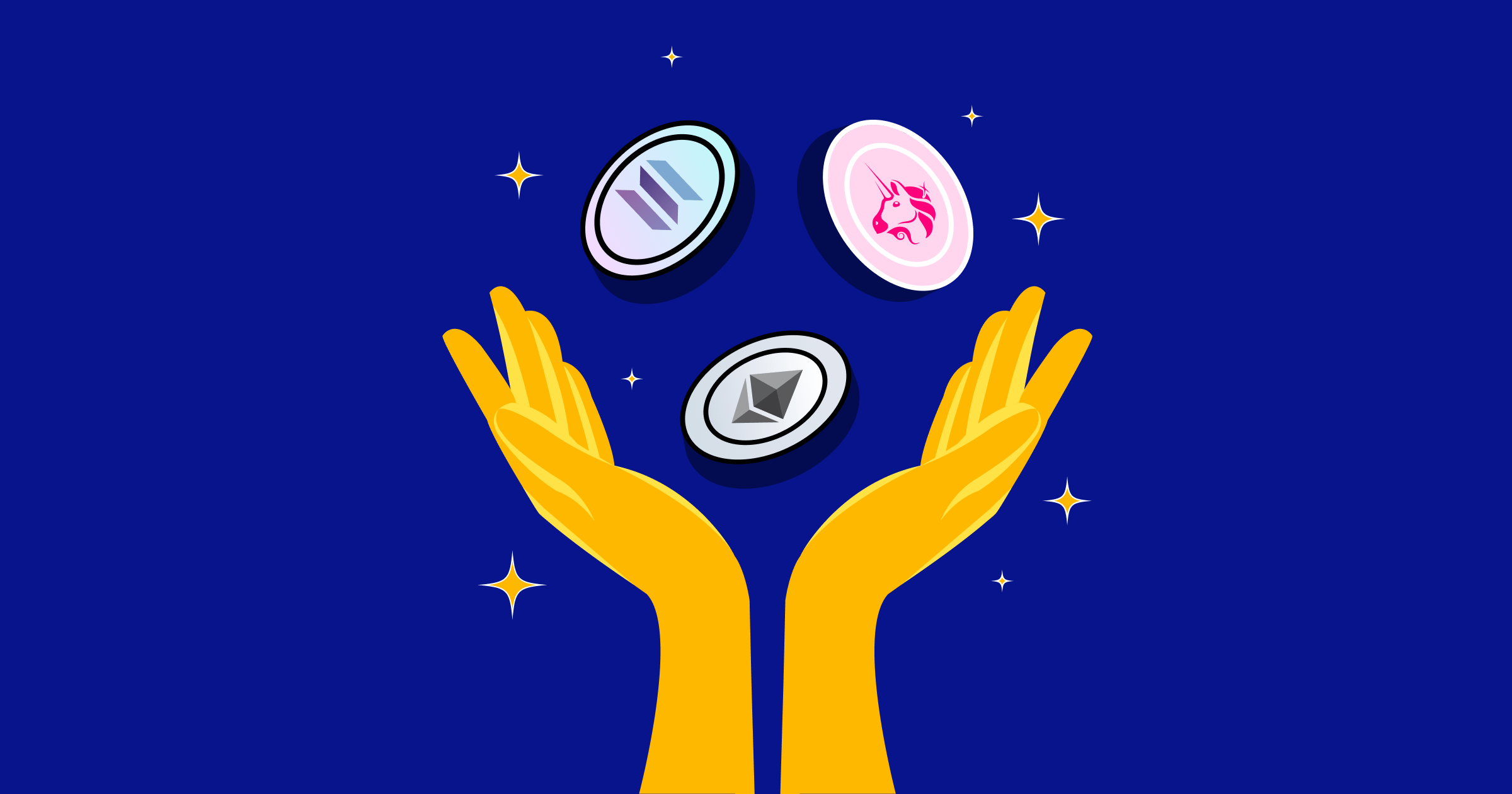 Do you know that more than 20,000 altcoins are available in the crypto market, and the number continues to rise with time? We can call any cryptocurrency other than the original crypto Bitcoin, an Altcoin, or an Alternative Coin. While Bitcoin accounts for around half the cryptocurrency market capitalization, the rest of the market consists of different altcoins.

Depending on its utility and functionality, the importance of altcoin is decided. There are different types of altcoins in the market, such as stable altcoins, governance altcoins, staking-based altcoins, and more. A few examples of altcoins are as below.

The list goes on to literally a great extent. Each altcoin has different functionality. For example, Ethereum provides a means to transact on its network, while Dogecoin acts as a payment token, and the USDC coin is a stablecoin.

How Do Altcoins Work?

Now that you know what are altcoins, you can guess that they function very similarly to the primary crypto Bitcoin. Cryptocurrencies are based on blockchain technology and work on the basis of a distributed ledger that provides them their core value–decentralization.

Nodes of computer networks worldwide look after verifying and adding new records of transactions to the system. Once these data are added, it becomes almost impossible to tamper with; 51% of the total computer networks must be tampered with to validate the spurious data. And that is a big challenge!

However, this is also one of the drawbacks to this system, as once data is added, it stays there forever and is hard to be modified.

What Are the Different Types of Altcoins?

There are mainly four types of altcoins in the crypto market, depending on the purpose they serve.

As the name suggests, the purpose of stable altcoins is to stabilize the price. They achieve this purpose by maintaining a reserve of the underlying asset. Since most stable altcoins are pegged to the US dollar, their value remains close to $1. Also, due to their stable rates, instead of being an investment option, stable altcoins are used for sending or receiving money.

Fun fact: Do you know the first stablecoin was Tether? It was founded in July 2014 and was known as Realcoin. In November 2014, its name was rebranded to Tether.

The process of verifying transactions and adding coins to the system through proof-of-work is called mining.

Proof-of-work (PoW)  is a consensus mechanism. Know more about it here.Various cryptos use PoW, wherein miners solve complex mathematical or cryptographic puzzles to add new transactions to the blockchain. The system rewards the miner that beats others and solves the equation first. The rewards are typically new cryptocurrencies. It protects users by securing the system against fraudulent activities. Bitcoin was the first crypto that was mined.

Other cryptos, like Dogecoin, Bitcoin cash, etc., are mining-based altcoins. However, some of them need not be mined, for example, Nano. All of it is available for people to buy/sell. No new Nanos are created when transactions get added to the blockchain.

Similar to mining-based altcoins, there are staking-based altcoins too. They use proof-of-stake (PoS) consensus mechanism to verify transactions and add them to the blockchain. Know more about PoS here.

Here, a person stakes as many coins in the network to get selected as a validator. There is no solving of complex puzzles and competition. An algorithm randomly selects one person from the people who have staked their cryptos to validate a transaction. A successful validator is rewarded with a part of the transaction fees.

The first ever staking-based altcoin was Peercoin, after which there has been a line of new cryptos using this mechanism like Cosmos, Polkadot, and more.

Governance altcoins have the sole purpose of maintaining the overall governance system of a blockchain network. They offer their holders the right to vote on any decision related to the project.

These tokens represent democracy in the crypto market and build trust in the community. MAKER (MKR) is an example of governance of altcoins.

Altcoin vs Bitcoin: What’s the Difference?

While there are no major differences between altcoins and Bitcoin, a few things still separate them. Bitcoin is the first ever cryptocurrency launched in the year 2009. It began the era of not only digital assets and currencies but also blockchain technology. On the contrary, altcoins came after Bitcoin and continue to increase with time due to newer innovations and technological advancements in this field.

Bitcoin is the largest cryptocurrency in terms of market cap and holds almost half the market share, while altcoins occupy the rest. Also, Bitcoin has established itself, and while it is quite volatile, it enjoys its share of success. Compared to that, altcoins inherit a greater risk of failure. While altcoins like Ethereum and Tether are well-established, newer coins are risky.

However, that also means that they have more room for growth. Bitcoin is the oldest and most widely known, but some altcoins perform superior to Bitcoin in terms of speed of completing transactions.

Things to Consider Before Investing in Altcoins

Once you know what are altcoins and you are planning to invest in them, the prerequisite for you is to know the ins and outs of it, aka its advantages and disadvantages. After all, an informed decision is required when matters are related to money.

1. Benefits of investing in new technology:

Altcoins were invented after Bitcoin; Bitcoin brought blockchain technology to the forefront. Altcoins are also based on the same tech with more improvement and advancements than Bitcoin.

Users can get certain rewards from holding altcoins. For example, for mining coins or staking-based coins, the users can get rewards. All they have to do is validate transactions (which might not be as easy as it sounds). Also, based on the coins, there are other rewards, too, such as discounts on charges, early access to products and services, and more.

3. A wide range to choose from:

There are thousands of altcoins to select from and invest in based on their functionality and your individual preferences, which is a big advantage of altcoins.

Altcoins, without a doubt, have a large quantity in terms of types; however, when it comes to market share, Bitcoin still has a hold on half of the market cap.

Certain risks are involved while investing in altcoins, as many of these coins are relatively new. Some lack credibility, and if the underlying project is not successful, a coin may lose its value. Also, like Bitcoin, altcoins have inherited higher volatility.

3. Not available on every exchange:

While Bitcoin is literally available on every crypto platform, the same cannot be said for altcoins. Altcoins like Ethereum or Tether may be available on all exchanges, but newer altcoins do not have that scalability.

Is Investing in Altcoins a Good Idea?

If you are sure about altcoins and are confident to invest in them, ask yourself–how much is your risk appetite, and what is the return percentage you expect from your investment?

As mentioned earlier, altcoins are risky. However, that doesn’t make it a bad investment. The necessary step is to keep yourself updated with these cryptos and know how they function before investing your money. Check the history of the altcoin you want to invest in, its website, founders, team, whitepaper, and what the community has to say before you invest.

If you are sure that you want to share a part of your portfolio with alternate cryptocurrencies and you are well-researched about which one you would like to invest in, then definitely, investing in altcoins is a good idea.

What are Some Examples of  Altcoins?

Some of the popular examples of altcoins are as follows.

Ethereum (ETH) is the largest cryptocurrency after Bitcoin having a market cap of roughly $20 billion. This crypto was launched in 2015 and is based on the Ethereum blockchain, which is the base of many other cryptos.

This altcoin was launched in 2018. It is a stablecoin having its value pegged in the US dollar.

Tether is also a stablecoin; it is also pegged to the USD. It was the first ever stablecoin and is also the largest one in the market. The launch year of Tether is 2014.

XRP was launched in 2012 as a payment method by Ripple digital payment network. It was launched to take the payments use case of crypto a notch higher by creating a payments ecosystem between various financial institutions.

How to Invest in Altcoins?

Investing in altcoins is not difficult if the coin is well-established, such as Ethereum. You can sign up on any crypto platform and invest through them. Alternatively, you can also buy these coins using any supported crypto wallet.

Before you invest in altcoins, always have thorough research done. If you are not sure about investing in individual altcoins, you have the option to invest in coin baskets or Coin Sets.

We at Mudrex have made your task even easier by offering our expertise and creating specialized crypto baskets for you to invest in – Coin Sets. You have the option to not only choose which types of cryptos to invest in (market cap-wise, industry-wise, etc.) but can also invest a small amount and reap amazing benefits. All you have to do is take the first step, decide your goal, and take the leap of faith as per your suitability and preferences.

Any crypto other than Bitcoin is considered to be an altcoin. The word ‘altcoin’ of formed with two words – alternative and cryptocurrencies. The term was coined because various cryptos launched after Bitcoin tried to be its better alternative version. However, much innovation happened later, and various altcoins went on to solve different problems.

2. What is the difference between Bitcoin and altcoins?

Bitcoin is the first crypto invented and has half of the market capitalization. Altcoins are cryptocurrencies that came after Bitcoin and, as a result, are considered alternatives. Altcoins are advanced compared to Bitcoin but also possess higher risks.

3. Should I invest in Bitcoin or an altcoin?

Where to invest your money is a question that depends on your preferences, risk appetite, and research undertaken. Bitcoin is always a safe bet; however, if you want to invest in altcoin, you must know its background, website, founders, and more. If you have done your homework, Bitcoin and altcoins are both good investment options.

According to Coinmarketcap, more than 20,000 altcoins are in the market as of July 2022.  Almost 80 have a market cap of above $1 billion, while close to 100 altcoins are launched daily.