Home » What Is Ripple (XRP) Cryptocurrency and How Does It Work?

What Is Ripple (XRP) Cryptocurrency and How Does It Work? 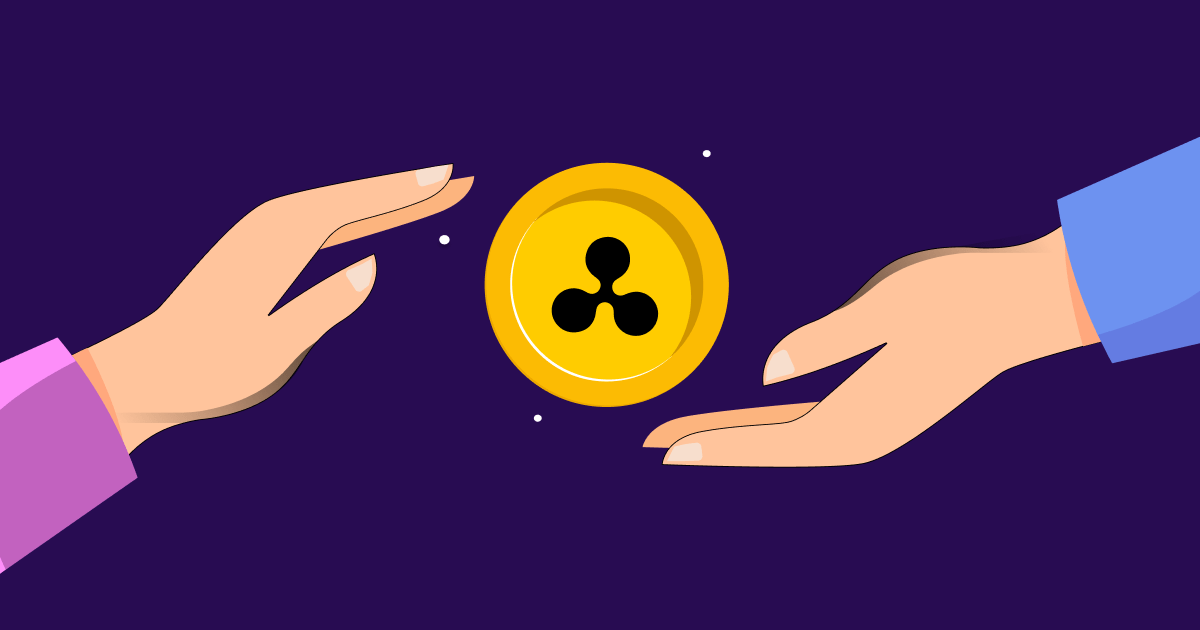 Currently, there are 21,009 cryptocurrencies in circulation, which will go up further in the future. However, only a handful have added immense value to their target audiences till now. Undoubtedly, one of the projects is Ripple (XRP), whose roots can be traced back to 2004, even before the release of Bitcoin (BTC). Now you might ask, what is Ripple?

Ripple is neither a digital gold (like Bitcoin) nor a platform enabling dApp development (like Ethereum). But it acts as a payment settlement and currency exchange system by offering trustless, cheap, and faster cross-border payments. Let’s explore the working model of Ripple and identify how it adds value to its users.

What Is Ripple Cryptocurrency?

Ripple is a digital payment network connecting banks and financial institutions to communicate and process payments globally (including fiat and cryptocurrencies). It was designed to improve the legacy financial system as we know it.

Ryan Fugger, a Canadian computer programmer, developed RipplePay in 2004 to offer a secure online payment facility. Jed McCaleb, a programmer, created the XRP cryptocurrency in 2011 and reached out to Ryan to use the RipplePay network. They both teamed up with Chris Larsen to launch their company (called NewCoin) and the XRP cryptocurrency in 2012. After multiple iterations, NewCoin finally rebranded itself to Ripple in 2015.

Ripple introduced Ripple Consensus Ledger (RCL), which they later rebranded to XRP Ledger (XRPL). XRPL is a public blockchain aiming to solve the issues with the traditional banking system. It allows real-time financial transactions verified by the network participants. As of March’22, the network can process up to 1,500 transactions per second for a minimal fee. RippleNet, a network of banks and payment facilitators, is another development from Ripple.

Although Ripple has vast potential, it is currently facing a high-profile legal battle with the U.S. Securities and Exchange Commission (SEC). SEC filed a lawsuit in 2020 that Ripple sold $1.3 billion worth of XRP cryptocurrency, which is classified as an unregistered security, violating federal laws.

Difference Between Ripple and XRP

According to its official website, Ripple is a privately held fintech company providing currency exchange and payment solutions. Ripple defines XRP, its native token, as faster, cost-effective, and scalable than any other digital asset.

The XRP token runs on XRPL and you can use it to facilitate network transactions. For example, if you need to exchange a couple of fiat currencies (INR and USD), XRP acts as a bridge currency for completing the transfer. Hence, this enables financial institutions to trade currencies at a lower cost with the help of XRP instead of using other fiat currencies.

A fee of 0.00001 XRP is deducted for processing the transactions. Compared to the hefty fees banks charge for cross-border payments, it is inexpensive. Also, a typical transaction takes an average of five seconds to process.

Mining is the process most cryptocurrencies use to facilitate transactions and introduce new currency into the network (generally as a reward for the verifiers of the transactions). However, Ripple follows an alternative approach called “pre-mining.” There are 100 billion units of XRP tokens Ripple periodically releases publicly to boost the XRP market. There is no need for mining.

XRPL maintains this maximum limit. It also ensures no more XRPs will be generated. Out of this total supply, XRPL distributes 55 billion tokens to users on forums. Most of the remaining tokens are escrowed to fund its technology and development.

How Does Ripple Work?

Ripple is responsible for the development of XRPL and RippleNet.

XRPL is a decentralized, open-source distributed ledger. On the other hand, RippleNet is built on top of XRPL. You can use it to facilitate cheaper and quicker transactions.

XRPL uses a federated consensus mechanism in which the network participants are known and trusted by each other. It differs from the Proof of Work (PoW) or Proof of Stake (PoS) mechanism.

In the case of Ripple, things work differently and are somewhat centralized. Though anyone can become a validator on the network, Ripple maintains a Unique Node List (UNL). This list is used to select validators for validating transactions. Ripple, Coil, and the XRP Ledger Foundation publish the UNL based on several criteria like past performance, verified identity, etc.,

The transactions are added to the network after a significant portion of UNL nodes agree. As of March’22, there were over 150 network validators and about 36 under the unique node list.

RippleNet operates on top of the XRPL, providing banks with faster, cheaper, and simpler cross-border transactions. It can be a feasible alternative to Society for Worldwide Interbank Financial Telecommunication (SWIFT) which is the existing international payment infrastructure. Traditionally, cross-border payments are complex, time-consuming, and expensive.

What Are the Advantages and Disadvantages of Ripple (XRP)?

Though Ripple is a promising venture with many merits, there are risks associated with it as well. Below are the notable advantages and disadvantages of Ripple and its cryptocurrency XRP.

Compared to traditional institutions, the transaction fee for transacting using Ripple is 0.00001 XRP, which is less than a fraction of a cent.

While banks take days to complete a wire transfer, XRPL takes four to five seconds to confirm a transaction.

Ripple network not only uses XRP to process the transaction but also allows fiat and other cryptocurrencies.

Ripple has attracted hundreds of financial institutions to its network. Also, XRP can be utilized by small businesses and consumers for secure money transfers.

Ripple maintains a default list of validator nodes, which is against the philosophy of decentralization.

Ripple’s consensus mechanism is less secure than other protocols.

Ripple holds a large portion of XRP, allowing the scope for market saturation with large-scale sales.

SEC filed a lawsuit against Ripple, stating that it should have registered XRP as security as the company can decide when to release the digital asset. When litigation was filed, XRP lost $15 billion of its market capitalization.

Bitcoin Vs. Ripple XRP: How Is Ripple Different From Bitcoin?

Though both Bitcoin (BTC) and Ripple (XRP) falls under the crypto asset class, they are entirely different regarding their working mechanism and the problem they solve.

Bitcoin has a supply threshold of 21 million, whereas XRP has a total supply of 100 billion tokens. This supply variation is one of the critical reasons for the stark price difference between BTC and XRP.

Bitcoin and Ripple utilize different consensus protocols to verify and process the transactions.

Bitcoin uses Proof of Work (PoW) to verify transactions and introduces new coins when a block is added to the blockchain. It requires participants to set up mining devices to solve complex mathematical equations. The miner to solve it first gets to add a block of transactions to the Bitcoin blockchain. In this case, anyone can become a Bitcoin miner.

In contrast, XRP uses a federated consensus mechanism. A list of pre-determined validators is suggested to the users to verify their transactions.

Due to its consensus protocol, XRP can process transactions at a low cost by consuming lesser energy, making it an environmentally friendly cryptocurrency.

On the other hand, the Proof of Work (PoW) consensus mechanism makes Bitcoin more energy-consuming and expensive. Hence, Bitcoin has faced much criticism for negatively impacting the environment.

All 100 billion XRP tokens were minted before launching the cryptocurrency, making it pre-mined. Ripple locked 55 billion XRP into an escrow and established smart contracts to release one billion XRP from escrow every month.

In contrast, new Bitcoins are supplied only after participants release them through mining. Until now, more than 19 million out of the total 21 million Bitcoins have been released into the market.

Bitcoin is completely decentralized in its approach. On the other hand, though Ripple claims that XRP is decentralized, the company possesses sufficient control over the token.

Should You Invest in Ripple?

Ripple network does a commendable job of enabling a quicker and cheaper global payments system. Hence, it can potentially replace outdated international money transfer systems. It has already been adopted by large financial institutions, including American Express, Bank of America, IndusInd Bank, and many others. Any favorable output for Ripple in the legal battle with SEC could profit the investors. Going forward, the growth of Ripple depends on the following factors.

However, XRP is highly volatile due to the cryptocurrency’s inherent nature, making it unsuitable for faint-hearted people.

To answer the question, should I buy XRP? Considering its capabilities, if you think it could be a good investment, you can allocate a small portion of your overall crypto portfolio to XRP.

How to Buy XRP Crypto?

Or better, invest in the Blue chip Crypto Coin Set offered by Mudrex. It consists of the top blue chip cryptos in the market, including Bitcoin and Ethereum. The proportion of each of the cryptos in the Coin Set is such that investors get the maximum return by taking the optimum level of risk.

Ripple is among the top 10 cryptocurrency projects in terms of its market cap. It is challenging the inefficiencies of the existing international money transfer system, and its existing bank ties are highly encouraging for investors.

However, crypto enthusiasts raise concerns over the centralized nature of Ripple’s consensus mechanism. It is also evident that Ripple, a fintech company, is highly susceptible to the rules and regulations. Hence, investors must be cautious before proceeding with any sizeable investments in XRP.

1. Is Ripple better than Bitcoin?

Yes and no. Ripple is better than Bitcoin in terms of processing transactions. Ripple’s XRP is faster, cheaper, and more energy efficient than Bitcoin due to the difference in their consensus mechanism. However, regarding security, Ripple fairs poorly as its consensus protocol is less secure than Bitcoin’s.

2. Are XRP and Ripple the same thing?

No. Ripple is a privately owned fintech company that offers XRP Ledger, a public blockchain focusing on improving the traditional banking system. Whereas XRP is the native token of the network that runs on XRP Ledger.

3. What is special about XRP?

The specialty of XRP lies in the problem it solves. XRP is a bridge currency. Financial firms can trade currencies using XRP rather than other fiat currencies. And the transaction fee is a minuscule 0.00001 XRP.